Margin Walkers: If Baltimore isn't a music town, well, why not?

Feel free to share your thoughts about the affordable artistic atoll on I-95. But please know that I am not repsonsible for the inclusion of the phrase "beard-rock" in the second paragraph. Which ever editor made that call will have to answer for their sins...
at 3:35 PM 2 comments:

From the first time I saw the late, great Dismemberment Plan, I've had nothing but repsect for Travis Morrison. The man is a gifted embassador for funky white kids everywhere, a charismatic performer whose humour defuses pretension - both in himself and in his audience. As a participant in the indie scene, he's a sceptic who refuses to let people buy their own bullshit - a kind of college rock Jon Stewart.

So I was thrilled when Mr. Morrison, in a recent interview, eloquently explained an unease I've felt while surveying the musical landscape over the past year:

"Because of this impatience for intellectual comprehension – usually within 24 hours, within one listen – I mean, it’s very odd how the audible voices in intellectual discourse in music at this moment are enforcing an extremely pop view on things, as pop is any 15-year-old who wants records from Mandy Moore. It’s a very strange state. It’s the main reason why I don’t read rock press much anymore, because I can’t read all these smart people talking like 15-year-olds who are listening to Kelly Clarkson mp3s. I don’t feel like it’s very amenable to art. It’s not my definition of art."

In other words: since when the fuck did it become hip to buy into the Top 40? It's epidemic among the underground - both within artistic and critical circles - to find praise being lavished on music manufactured by Madison Avenue, and specifically for Ms. Clarkson. Offenders have included everyone from former Soul Coughing singer Mike Doughty (who praised Clarkson and prefab pop tart Ashlee Simpson on his blog) to New Yorker rock critic Sasha Frere Jones (whose current top five songs are by R. Kelly, Clarkson, Mike Jones, Amerie, and Lady Sovereign). Apparently activist singer/songwriter Ted Leo's disgust with mainstream America doesn't preclude a cover of Clarkson's "Since U Been Gone". Even the obscurist snobbery of the blogosphere is giving it up for heavy-rotation hits: critically acclaimed music blog Music For Robots has repeatedly and unabashedly praised Darling Kelly for her ubiquitous *ahem* "rock" hit.

Please don't get the impression that I have something personal against Kelly Clarkson, because I do not. She merely and dutifully follows the command of her pimps at RCA; she's a saccharine Horatio Alger story born of a television talent-show, and all she wants to do is sing, sing, sing. We should all be so lucky to have our dreams come true.

But I do have an axe to grind with people who should know better than to praise test-marketed, formulaic, auto-tuned, quantized self-advertising jingles. Among the offenders listed above, the partyline being towed is a refusal "to discriminate in pop music." This seems to be a semantic problem, with people confusing "discriminate" and "prejudice". Contrary to its conventional use, to discriminate is not necessarily a bad thing: it means your senses are tuned to detect the nuanced distinction between good and bad, high and low, art and bullshit.

So who the hell wants to be recommended music by some schmuck who refuses to dismiss tripe when he tastes it? Is no one else suspicious of music that comes ready to please and dying to entertain? Or is this some new nadir of irony, where the capital-H Hip outdo the common hipster by going against underground convention and buying into the mainstream?

Fuck that. Fuck all y'all. I refuse to see the Art I adore be tarted up like some cheap whore, eager to please and passed around for cheap thrills. Borrowing the phrase from Death From Above 1979, I declare ROCK 'N' ROLL JIHAD on anyone who is foolish enough to entrust the Big Five and other corporate cutthroats with the future of sound.

No amnesty for artistic treachery.
at 9:01 PM 3 comments:

It's an exceedingly weird news day, not the least of which is the above story regarding a 34-year-old metalworker who's been trying to burn the seat out of women's trousers with sulfuric acid. "It really turned me on to see a butt in a pair of jeans," he explained in his confession to the police.

Elsewhere in the world, a man threatened suicide atop Space Mountain at Hong Kong Disneyland, spectators were shot with a starting gun at a Thai high school, religious fanatics are picking fights with people who can't hit back (not that that's unheard of), and Spain claims to have gone "infinitely gay".

How "Soon" Is Now

I called it. As the cultural feedback loop swallows its own tail, I knew it was only a matter of time before nostalgia began nipping at the '90s. In our annual holiday letter to friends & family last year, I listed five positive aspects to the '80s revival. Along with a resurgence of interest in post-punk autodidacts the Fall, I predicted that, at the end of a tunnel full of eyeliner and flayed high-hats, there would be the light of a shoegaze revival.

Diving back into dreampop makes sense for everyone enamoured of postrock's ethereal propulsion but disappointed with its lack of solid songwriting. But it became inevitable when notorious recluse & guitar god Kevin Shields appeared aboveground to score Sofia Coppola's Lost In Translation. After releasing the watershed shoegaze (and just plain classic) album Loveless with My Bloody Valentine in 1991, Shields balled up into a latter day Brian Wilson, appearing only as a supporting player on records by J Mascis and Primal Scream. As soon as news spread that the first original music by Shields in a decade would be on the silver screen, online indie demagogues Pitchforkmedia.com had declared Loveless the greatest album of the 1990s and the Creation Records website was getting more hits than Tyrone Biggums. It was only a matter of time before tidal guitars and cathedralic ambience returned to rock.

That day is upon us, my friends. And as the following bands demonstrate, I should be pretty damned careful about what I wish for.

Billy Corgan - The first time my wife ever heard My Bloody Valentine, she asked me if it was Smashing Pumpkins. When I told her it wasn't, she (a lifelong Pumpkins fan) dropped her jaw and said, "Billy Corgan owes these people some fucking royalties." To say the least. Corgan's career has been built lock, stock, and barrel on the Valentine template: the Big Muff-ed monster guitar tones, the heavy heartbeat pulse of the drums, the breathily cooed vocals, even Alan Moulder behind the mixing board. Fourteen years after Siamese Dream, his tunes may have a more mechanical New Wave heart, but Corgan's only variation on Shields' sound remains his nasal sneer and shitty poetry.

Clap Your Hands Say Yeah - The latest winners of the blogosphere hype gamble, Clap Your Hands Say Yeah were destined to win the hearts of Baby Lester Bangses everywhere. Witness the hipster bait: a pretentiously childlish name, Pavement-approved lo-fi production, jangle-pop songcraft with a college-radio five-o-clock shadow, and a singer who shamelessly apes David Byrne. Talk about a safe bet. Like every other band prematurely canonized by the online music community (I'm looking at you, Arcade Fire), CYHSY are a perfectly competant pop band who write utterly unremarkable songs. This song sounds like an emasculated B-side from Isn't Anything fronted by Gordon Gano. Whoop dee crap.

The Wilderness - With their debut release on au current indie label Jagjaguwar and already having been presented their official "Members Only" jacket from Pitchfork, Baltimore's own Wilderness have a fairly full sail for a band that has just cast away. Their guitars scale the gothic spires of the Jesus & Mary Chain and Slowdive's better work. But their music - the tribal drumming, the metallic mantra of the guitar, the feral preacher frontman - is not their own. It's been done for the past eighteen years, and far better, by another Baltimore band you may have heard of: Lungfish.
at 10:59 AM No comments:

As you exit the train station and head north past the police box, on your right is the salvation of everyone crippled by the cost of living in Tokyo. A wonderous little outpost of earthly delights, all of which can be bought for a mere 99 yen. 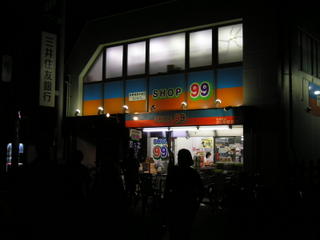 No one in their right mind would dream of eating anything from the Dollar Store - what, you'd actually risk swallowing a spoonful of marshmallow paste or Dr. Dingo's Beef Jerky? But trust in the progressive spirit of Nippon to perfect a flawed concept. It's both the blessing and the curse of Shop 99 that everything costs 99 yen. Half a kilogram of pancake mix for a dollar - who can't get behind that? But when a single apple costs the same amount, your wallet feels a bit bitch-slapped. Still, the only grocery shopping I don't do at Shop 99 is buying in bulk - which you can't really do when your fridge is the size of a shoebox and and your room is the size of, well, a larger shoebox.

In other words, my life as a consumer revolves around this damned store.

Did I mention it's open 24 hours a day? And about eighty times during every one of those hours, you'll hear the Shop 99 Theme Song - an unsettlingly upbeat slab of uncut saccharine J-Pop. The childishly cheerful song begs for a sing-along, as you imagine the anonymously adorable munchkin singer bouncing around the recording booth in pigtails. What I find most distracting about it is the ludicrously busy bassline, which bumps up against the elementary melody like a toad on crystal meth.

And regardless of how truly, unbelievably annoying the song is, you'll find yourself humming it all the way back home. Maybe even singing yourself to sleep at night. Just thank yourself that you can't understand the words.
at 9:51 AM 4 comments: