Don't call it a comeback!

Is it the man or the pants that used to be Puffy?

Doesn't it seem fitting that the MTV awards ceremony hosted by Diddy Wa Dizzle (or whatever it is this week) was the chosen venue for MC Hammer's comeback?

As a Great Surprise To Absolutely No One...

No shit. That reads like one of those Onion headlines that overstates the obvious for tragicomic effect. At least it made me laugh harder than today's other eye-popper: "U.S. televangelist calls for assassination of Venezuelan president."

What a terribly un-Christian thing to do, don't you think? 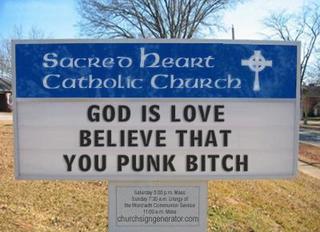 Edit (August 26, '05) : The Guardian reports, "Yesterday [Pat Robertson] apologised for his remarks. 'Is it right to call for assassination? No, and I apologise for that statement. I spoke in frustration that we should accommodate the man who thinks the US is out to kill him,' he said."

Hmm. Lord only knows why Chavez would think America is out to kill him, eh, Pat?
at 1:56 PM No comments:

As we've discussed before, one of the chief problems presented by the Internet is that the ease of communication creates a critical rat race in which sensible analysis is trampled underfoot. Everyone is so busy trying to be a shot-caller that an astounding amount of mediocre pablum slides in past the gatekeepers. After being told too many times to get excited over inane derivative drivel, my vengeful streak has gotten the best of me. Henceforth, when I see a blogger licking the boots of a band whose greatest acheivement is their anonymity, I will post a musical retort - a genuinely different and decent song to balance the bad one.

And so today, ladies and gentlemen, I give you the late Love Life, another great band from the Greatest City in America. For four brief years, the quartet attacked Kurt Weillian cabaret as only ex-punks could: with the howling melodrama of goth-punk godfathers the Birthday Party, physically attacking their instruments like Tom Waits at his most primitive. (It makes stylistic sense for this post to follow the one about Scratch Acid.) The creepy continentalism and ambitious arrangements also recall Mr. Bungle's masterwork, Disco Volante.

Flaming out after four years, Love Life managed to put out two brilliant records. The latter (from which this song was taken) was the consistently brilliant Here Is Night, Brothers, Here the Birds Burn, which effectively launched the producing career of TV On the Radio's David Andrew Sitek.

The ragged charm and world-weary grace of Love Life was, according to vocalist Katrina Ford, very much reflective of living in Baltimore. Recalling her relocation to Charm City in an interview with City Paper, Ford believes "there's a beautiful despair here that is unlike the surface beauty of New Orleans, which acts like a carnivorous plant that draws you in like a fly with a sweet-smelling exterior. Baltimore is ugly, but if you stay for a while you really discover something very beautiful about it. The beauty is in the people here. How hard they work and how definitely working class this town is."

This post was written in response to this post on the Simple Mission blog about the San Diego punk-lounge act Get Hustle, who I found to be undynamic, unrepentently sloppy, and too conceited to actually write songs.
at 5:44 PM 1 comment:

If I ever regret leaving Baltimore...

...all I have do to is go here and I'm glad I'll never be sulking in the corner spitting bullets at the solipsistic scenesters in the Talking Head or the Ottobar again.
at 1:51 PM No comments:

A Tale of Two Davids

...and David Yow during the glory days of the Jesus Lizard


Has anyone else noticed that the title track from the new Foo Fighters album, In Your Honor, nicks its keystone riff from the song "Owner's Lament" by Scratch Acid?

That doesn't surprise me. As Jim H of Vinyl Mine would tell you, Scratch Acid remains one of the most criminally uncelebrated bands of the '80s post-punk/noise scene. Scratch Acid had less in common with the druggy dirges of fellow Texan sonic terrorists the Butthole Surfers than with the exorcismic squall of the Birthday Party, thanks in no small part to frontman David Yow. Armed with a voice "like a man with his genitals caught in a bear trap", Yow had (and maintains) little regard for physical danger, the Fourth Wall, and clothing. (Bassist David William Sims recalled that the craziest thing he's seen Yow do in performance was launch himself off of the 30-foot-high stage at the Glastonbury Festival.) A colleague of mine from Chicago once told me about seeing the Godfather of Onstage Psychosis, Iggy Pop. His only comment:

While some of Scratch Acid's contemporaries supernova'd (the Flaming Lips, Sonic Youth) or sold out (the Butthole Surfers - come on, we ALL remember Electriclarryland), Scratch Acid were torn apart by that classic combination of occupational hazards: a crooked record company, tour fatigue, and getting hassled by the cops. The two Davids of Yow & Sims moved to Chicago, where they joined forces with six-string sledghammer Duane Denison and seismic skinsman Mac McNeilly. That band, the Jesus Lizard, created some of the most viscerally satisfying rock in history - no one, from Big Black to Lightning Bolt, has produced a song as propulsive as "Boilermaker". Their legion of fans included other musical luminaries such as Buzz Osborne and Kurt Cobain. Anyone who saw them perform will swear on their mother's grave that it was the greatest show ever.

And that, Mr. Grohl, is something that you'd be hard pressed to hear from any one of the millions of Foo Fighters fans. Sorry.
at 2:21 PM 1 comment:

Sing a Saccharine Song By a Pissing Pedophile

Call me Silky Jonhson, but am I the last damned person on this planet who thinks that R. Kelly is bullshit? Nevermind the fact that he's a twisted little horndog - his music sounds like an autistic Bill Withers on crank and his lyrics pack all the wit and power of a flaming Pinto. I've seen better pick-up lines on a shithouse wall.
at 10:26 AM No comments:

The first half of my year was split between cozying up to classics and mining for diamonds in Japan. Recent weeks, however, have seen a slew of new (or soon-to-be-) releases that have renewed if not my faith then at least my interest in contemporary music. I'll spare my doctoral thesis on what's wrong with modern music for the near future. In the meantime, here's a few of my favourite new tunes...

Strictly speaking, this isn't a new release, but it's the first time all twenty-four Peel sessions by the Fall have been available in one convenient package. I'm not trying to steal any thunder from the splendid Brit blog Spoilt Victorian Child by following their recent Fall post with my own. I only recently received the boxset for my birthday and it's damn near shut out everything else from my stereo. As brilliant and mercurial and "always different, always the same" as the band itself, the Complete Peel Sessions is, as critics the world over have hollered, THE definite Fall document.

It comes as no surprise that the first decade of Mark E. Smith & Co is nigh immaculate. The band's first session in '78 is a bloody slab of postpunk that makes Joy Division sound dainty. (The rubbery wail of "Rebellious Jukebox" is an early highlight.) By the time Brix was on board, the Fall's mid-'80s Mancabilly roar was unstoppable.

But don't think that the boxset is a merry promenade down Yellow Brick Big Hit Road. Its surprises are manifold, and are all perfectly encapsulated by the band's cover of the Captain Beefheart romp, "Beatle Bones 'N' Smokin' Stones". Witness the band whose heads:

1) reeled with giddy laughter beneath the layers of hardened sarcasm. The Fall's geniune joy in making music is made evident by their mercilessly goofy mystery detours, as "C 'n' C Stop Mithering" derails into "Do the Hucklebuck" and "Hark the Herald Angels Sing" is stripped of all pious sincerity.
2) burned with a violence for music well into its second decade. Few other fearless freaks can still blister your eardrums that far into their careers.
3) locked Vulcan-style into one of the best-oiled rock 'n' racket machines on the planet without being shellaced stiff. Don't let MES' sloppy slur fool you; these motherfuckers can play.

A vocal critic of the increasingly commercial and troglodytic world of hip-hop, Halifax' finest (only?) MC follows in the footsteps of Andre 3000 by almost abandoning his Native Tongue. The result is the most successful post-hip-hop experiment since The Love Below, standing head-and-shoulders above the uneven recent releases by K-Os and Mos Def. Spending only half the album in his classic dusty troubadour persona, Buck (born Richard Terfry) blends genres and mashes up the mix with a fervor that Beck lost after Odelay. The lead single, "Kennedy Killed the Hat", is either the bastard child of Stereolab and the Fall, or the best LCD Soundsystem that James Murphey never wrote.

Part Chimp - Bring Back the Ride

There's only so much analysis that sheer amplitude can be afforded. Melody, songs, subtlety - Part Chimp cares not for these. Taken from their sophomore full-length, I Am Come, this atomic blast of a song would make O.G. rock reductionsists proud and makes Lightning Bolt sound like genteel artschool wankers.

The final release on the esteemed Toronto imprint Three Gut Records, the Constantines' third album, Tournament of Hearts, actually comes as an honest disappointment. I'm not saying this out of a knee-jerk effort to out-hip snide Torontonians; it hurts to criticize a band whose debut I think earned them the mantle of Best Band In Canada. But whereas The Constantines and Shine A Light were the raw id-spew of the disenfranchised caged in a basement, Tournament sounds like an album written during those long, reflective hours spent driving across the barrens of central Canada. And where did the contrapuntal guitar duels go? Why do only a couple of tracks (e.g. "Working Full-Time") spin into the frenzy that makes Constantines shows rock 'n' roll revivals? I'm keeping my fingers crossed that this is not energy dissipating, but rather changing form - one that promises Brave New Wails if the next album has more songs like "Lizaveta", an arena-sized New Orleans funeral march that packs a bigger punch than any hackneyed anthem by Coldplay.
at 2:47 PM 1 comment:

::Memory of "the original Ground Zero" is dying
::The birth of "Mere Terror"
::Doubts over Tokyo Tribunal's legitimacy linger

"Whether Harry Truman was right or wrong in using the atomic bomb to raze Hiroshima in 1945 is now academic. But imagine the scenario if the Allies had lost that war for control of the Pacific Ocean: Japan would now be an economic powerhouse, the streets of North America would be teeming with Japanese cars and sushi bars, and karaoke would be all the rage."