In Collusion With Virgin Trains

Everyone laughs at that perennially-quoted quip from The Big Lebowski - you know the one, The Dude's weary reprimand that "You're not wrong, Walter, you're just an asshole." Everyone laughs. But a few among us wish Walter would've shot back at Lebowski: "Yeah? So?" 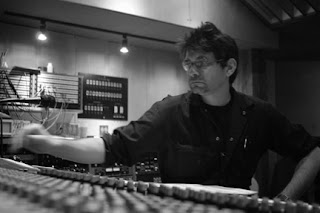 A happy-49th tip of my hat to six-string strangler, sound engineer, and celebrated food blogger Steve Albini, a man whose initials might as well be embroidered on my own bag of tricks. May cultural politesse continue to tremble in his presence.
at 4:04 PM No comments:

I'm In a Good Mood Today

How good? This good.

Speaking of musicians who got sleeve-tattoos of their influences yet were "ferociously and utterly contemporary"...
at 11:19 AM No comments:

Looking For a Spectrum Within a Singularity

Since Ariel Pink loudly shat himself onstage earlier this year, the hipoisie have turned their attention to his former collaborator (and philosophy prof - bonus points!) John Maus. It came as no surprise that Pitchfork yawped and I yawned at Maus' latest release for more or less the same reasons: coyly blurring the borders between "Top 40 cheese [and] ironic cool"; using his academic stature to silhouette otherwise vague & swampy songwriting; and an album title that sounds like a try-hard undergrad thesis that would prompt derisive laughter before being suffocated in red ink.

Like so many of his '80s-pop-pilfering peers, Maus' reviews are peppered with allusions - which is unavoidable, given how openly derivative Maus' music is. For example, both the song & video for his "Believer" single are basically Spectrum's "How You Satisfy Me" if Pete Kember had handed vocal duties off to Ian McCulloch. But as Adam Harper has pointed out, Maus is not only apologetic but proud of resurrecting bygone sounds:

I don't see this as a returning, I see this as a palette that we have to work with. These sounds are part of the vernacular. I resist this idea that we somehow move on to 'better' sounds. It's not about nostalgia or some kind of remembering, at least not consciously for me; it's what the work necessitates.

...I think it's supremely contemporary to use these so called 'nostalgic' effects, in the sense of the contemporary being out of joint with the moment in some way.

Which begs the question of when the contemporary has been anything other than "out of joint." This is one of problems I have with the hauntology "movement" (I suppose "stasis" would be a more appropriate term): it's indistinguishable from stock post-modernism in its cherry-picked anachronism, and suggests that the march of history was, until recently, a linear narrative untroubled by cataclysm, disruption, sudden exits, and unexpected entrances. Time is more wrinkled than Rupert Murdoch's brow; history is a slapdash patchwork of unmatched epochs; the contemporary has always been out of joint. The difference is that now we've the time, access, and materials to retreat from the future's shock-&-awe into the warm embrace of nostalgia.

But I agree wholeheartedly that we don't necessarily "move on to 'better' sounds" and that the past bequeaths artifacts & ideas that "warrant exploration right now, here, today." But Maus is being too generous in describing '80s synth-pop as a "palette." Imagining an Alesis drum machine & Yamaha DX-7 constitute a "palette" is as coarse and reductive as remembering the 1950s as America's Golden Age while conveniently forgetting segregation, patriarchy, the Korean War, and McCarthyism. It's not a palette, it's a colour.

If Maus and others wished to be heard as anything other than nostalgic tribute acts, they'll have to far less conservative in their pillage of the past. There have been musicians (e.g. Public Enemy or Amon Tobin) whose music has been constructed solely of samples, of existent material, of second-hand semiotics, yet has sounded ferociously and utterly contemporary. This is because they imposed no limits upon their source material: if it sounded good, it was fair game. Panning for gold across every decade and genre, then melting it down into a single white-hot mass - that is what made their music so unmistakably immediate: a total implosion of temporality. However, once too much attention or emphasis is put upon any particular source of antiquated inspiration, the trap of retro-referentiality has sunken its teeth into you.

Man, I'd better post something about music I enjoy soon, otherwise everyone's going to think my sole preoccupation is shitting on other people's enthusiasm.
at 9:04 PM 3 comments:

I know there's some epochal event being celebrated today... but for the life of me I can't remember what it is. The Bolshevik murder of Tsar Nicholas II? 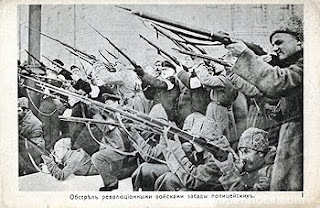 No, that's not right. The opening of the Tuskeegee Institute? The birth of the Crab Nebula? The ascension of the last Sultan of the Ottoman Empire?

Oh! Silly me, how could I possibly have been so mistaken. Happy 201st Anniversary of the French Occupation of Amsterdam, everyone! Cassez-vous, the Dutch!

Email ThisBlogThis!Share to TwitterShare to FacebookShare to Pinterest
Labels: Celebration, France, Humour, US VS. Them

The overwrought pageantry that passes for political punditry is so hackneyed & calculated, it's a wonder anyone pretends to be surprised anymore. Everyone so desperately admires & awaits a Howard Beale or Barry Champlain moment, forgetting (or ignoring) how expertly stage-managed & corralled by corporate interests those fictional "mavericks" were. Thus audience & broadcaster alike have managed to turn yet another non-event - Glenn Beck's exit from the Fox News network - into frothing political scopophilia.

Personally, I could give a fuck, not the least because I live outside America and have no TV or radio. More importantly, Beck himself is not special: his is a role to be filled by whatever appropriately attention-hungry ex-cokehead lunges hardest towards the microphone. But, as I explained last month in an e-mail to a friend, I'd had an appalling premonition about Beck's next step:

Beck can get the fuck off the air already. The only thing I'm worried about now is that, for his next act, he'll undergo some histrionic "crisis of faith" in the conservative movement and refashion himself into a pseudo-libertarian leftist and everyone will eat that shit right up. Don't think it can't happen! Ariana Huffington pulled off that stunt with startling efficacy (though I believe she's far more sincere than Beck has ever been).

But surely such a mawkish turn would be so transparent & tacky, no one would fall for it, right? I mean, come on. Yet, yet, yet, as I click across to Crooks & Liars this morning, what do I see atop the front page?

Beck on Republicans: 'I hate them'

Well, stomp on frogs 'n' shove a crowbar up mah nose! Who'da fucking thunk it. As good forgive-and-forget liberals, we should presently, if prudently, embrace the Fox News rodeo clown, not only for his dubious disillusionment with both mainstream political parties, but because Beck is (now) solidly against extraordinary rendition:

"Ghost planes - we're picking people up in the middle of the night. We're saying talk to us or we're going to drop you off over in Egypt. That's insane... We don't stand for anything."

Beck is unconvinced of the efficacy of state-sponsored kidnapping & torture (for which legal repercussions have just been forever swept off the table). Welcome to the club, buddy! Everyone against zapping civilians' scrotii with car batteries gets a gold star! If you disapprove of kidnapping, you get a cookie! How about this: as long as we're doling out special credit for shit you're supposed to do, can I get extra sprinkles on my sundae given that I've resisted the temptation to chainsaw off my neighbour's head & fuck his wife?
at 11:02 AM 1 comment: