Generally, I'm suspicious of people who are diligent in cataloging the birthdays & deaths of the better-known among us. It betrays an insipid nostalgia and a cloying, desperate hope that they themselves will one day be remembered fondly & eulogized flatteringly. Death: get over it, eh? But at the risk of hypocrisy, I can't allow this to slip by unnoticed...

Fare thee well, Peter Falk. I can't convey with any dignity or elegance how much I genuinely fucking love Columbo. I've not been so mortified since Patrick McGoohan's passing.
at 1:32 AM 5 comments:

Solitaire With a Deck of Fifty-One 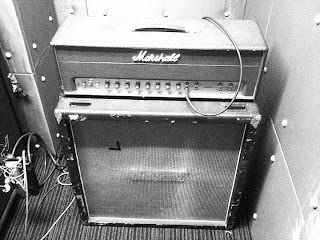 Hey, why haven't you been writing anything on your blog recently?

Well, yeah, it was kinda interesting back during that whole earthquake/tsunami clusterfuckalypse. Not to mention you're one of the top hits on Google searches for "I Hate Animal Collective", "lonesome cosmonaut", and "Thijs Van Leer".* But you've more or less vanished recently, what's up?
Well, I've been busy. Most of May was recording, then it was mixing, and now it's back to gigging. I'm spending my birthday playing some nicotine-tarred, beer-stank basement outside an American military base. Which has a certain unshaven charm to it, but I'd rather just stay at home, eat some cake, and listen to this Harmonia record my wife got me. Then play it backwards to see if there's any discernable dissemblance.


That's your excuse? Two months of near total silence because you're playing with microphones and compressors? Dude, Steve motherfuckin' Albini has engineered over a thousand records and he still finds time for a food blog.
Yeah, well, that's why he's Steve Albini and I'm not. Besides, when it came time to mix my own band's album, no one had a clue what they wanted it to sound like - roomy & loose? Cold & claustrophobic? Aspirationally big? It was a long road with many detours and much backtracking.

Why not write about the whole process of making an album then?
No. Certainly not before the album's actually out. The only thing duller than specialized tech-talk is when there isn't even any music to supplement the conversation.

So that's really it, you've just been locked indoors de-essing vocals and tweaking spring reverb for six weeks?
And look how stir-crazy it's made me: I've started thinking in duologue with some phantasmic other! But recently, I also finished reading a couple of books about the internet's oppressive demand for participation and its dilution of politics. Hell, Adam Curtis just aired a new documentary series about that very subject.

That was pretty good. Except for the second episode, it lacked the narrative cohesion of his earlier work, but they can't all be home runs.
Ain't that the truth.

So you've been a bit put off of self-important polemics & pop-cultural diatribes?
I mean, how much can I really contribute to the juvenile snickering or Malcolm Tuckerish political spinning of Weinergate?

I will, however, say this about last week's riot in Vancouver: watching the chaos unfurl on live TV, it was striking that news anchors repeatedly referred to the drunken miscreants as "protestors". Protesting what? That Canucks goalie Roberto Luongo played with all the skill of three pool noodles roped together? I don't know if it was an unfortunate tongue-slip or deliberate semiotic sculpture, but either way, it's disturbing to see that "protest" being impoverished as a legitimate tool of political struggle by directly associating the word with boozy troglodytes burning cars and smashing storefronts.

Sure enough, slanderous suggestions that the chaos was in fact an opportunist operation by the Black Bloc have proven completely false: it was the work of a bunch of beer-soaked bourgeois kids who were looking for an excuse to explode.

It's interesting to see the role social media played in the riot: on one hand, the mere presence of hundreds of gawkers wielding iPhone cameras must have egged on the more ambitiously destructive delinquents; on the other, the excess of close-range documentation did away with the anonymity of the crowd, effectively unmasking & shaming those who did the most damage. Do you think-

Look, that's a topic that absolutely merits more discussion, but I've gotta pack my gear for the gig tonight.

Okay, go on then. Well, come back soon and keep writing. If nothing else, you need the mental exercise if you're spending so much time locked indoors away from summer's swelter. Oh, and happy birthday!