Actually, you only live once...

John Barry's passed on. Now, the fear is that Morricone can't be far behind him, after whom we'll have lost every forward-thinking modernist film composer. Seriously, we'll be stuck with the likes of Rota plagiarist Danny Elfman and Hans bloody Zimmer, whose most impressive contribution to the art of film scoring boils down to BWAAAAAAAAAAAAHM!

At least Barry left us with an endlessly entertaining body of work.

I realize it's slightly worrisome to write a post about suicide and then all but vanish from the online landscape for two weeks. The fact is that, one week ago, my video logic board shat itself most spectacularly and I'm in the midst of catching up on the various tasks I was unable to perform without my machine. On the bright side, brief banishment to meatspace reminds me of the multifarious & wonderful things I should be doing every day instead of wasting hours on end skulking around FARK or Wikipedia or VBS or, uh, Gawker.

Anyway, I've got some immediate obligations to attend before offering any trenchant cultural dissection around here, though I offer the following morsel in the meantime...

Undoubtedly the funniest bit of online flotsam I've found this month was this scholarly history of Van Halen's "Hot For Teacher". However, one friend was more than a little aghast at the realization that a great many academics do discuss the most frivolous & frothy of junk culture with such chin-stroking seriousness. Determined to see just how far this po-faced cultural deconstruction could extend, he issued me a challenge.

I don't like to disappoint, and so I offered him (and now you): the seductive power of Kajagoogoo's "Too Shy" in precisely 300 words!

Despite their laughable moniker & ludicrous coiffures, Kajagoogoo’s single chart success, 1983’s “Too Shy”, was neither accident nor aberration. Two years after Depeche Mode’s smash “I Just Can’t Get Enough”, synthpop was a commercially-ascendant genre that had yet to lose its novelty, attracting scores of late-coming opportunists – including Kajagoogoo – exploiting synthpop’s instrumental arrangements & sartorial sense. This strategy let Kajagoogoo & their peers ride the genre’s commercial crest yet anchored them irrevocably to what was obviously a transitional pop-cultural moment, dooming their prospects for long-term success. This echoes the limp career arc of many one-hit wonders, before & after the New Wave.

Of course, a hit doesn’t simply happen. Guided by veteran producer Colin Thurston, Kajagoogoo began by expertly mimicking au current musical tropes: mid-tempo disco beats underneath minor-mode counterpoint played upon chirpy synthesizers and slapped bass. But the key to the success of “Too Shy” is in the very nonsensical nature of its earworm chorus:

The entire chorus consists of two lines, repeated four times. Chanting and repetition is known to have a detrimental effect on critical subjectivity, immersing the listener/participant into a non-critical hive-mind. Indeed, this attack on the listener’s consciousness is amplified by the further repetition of the word “shy” in the first line, inculcating greater passivity. Then “hush hush” forbids reactive expression outright, refusing the autonomy or agency of the listener. Meanwhile, the word’s sonorous sibilance suggests romantic intimacy; the song is literally seducing the listener, emphasized by the sexually-predatory description of the Singer-Other & Listener-Subject as being “eye to eye.”

Though these words appear vague as directives, their impact is heightened as the listener becomes disoriented by the aggressively non-grammatical construction of the chorus.
at 11:11 AM No comments:

Given that you can almost set your watch to the latest Wednesday Chuo-line jumper, it's no surprise that Japan marked the sad milestone of 13 straight years of over 30,000 suicides. This infamous statistic has prompted countless studies & strategies, to little (if any) avail. I personally think that being on the bleeding edge of technology - that is, submitting to the coercive power of nonliving objects - is one of the problem's deepest roots. This is also the diagnosis offered by Azusa Hayano, a geologist who volunteers his time to come the hallowed Aokigahara forest for suicides:

Face-to-face communication used to be vital, but now we can live our lives being online all day. However, the truth of the matter is we still need to see each other's faces, read their expressions, so we can fully understand their emotions to coexist.

Of course, weening hoi polloi off their glowing rectangles requires nothing short of societal re-engineering, so more modest means of discouraging self-murder must suffice for starters. If the public can't be coaxed off their iPhones for a little tête-à-tête, they can at least spend more face-time with themselves.

I think blue lights are as pretty as anything incandescent, but as one Keio University psychologist opined, "If you showed that [curing suicidal behavior with coloured lights] was possible, you would probably win the Nobel Prize." Besides, I think the mirrors' efficacy is given short shrift because of their half-assed implementation; three simple steps are all it would take to make a huge tactical difference. First, make them bigger. Look at the above photo: the mirrors are barely full-length and are at least four meters away. How could someone appreciate their personal worth when they can barely make themselves out in a grimy stainless steel slab across the tracks?

Second: maintenance. As a good friend pointed out, years of wear from inclement weather have started to warp the mirrors into grotesque fun-house distortions, which hardly seems conducive to self-esteem.

Unless perhaps you're also shooting enough smack to finance the Afghan economy.

Finally: product placement. Japanese train stations are festooned from stem to stern with all manner of advertisements. The Shinjuku station Sobu line suicide-prevention mirror is bookended by billboards, one of which seems perennially plastered with a Peach John advertisement. Yes, this Peach John, manufacturer of ladies' ornamental undergarments.

So imagine you're a working stiff in an ill-fitting suit, struggling through the anthill throng of the world's busiest train station after another 60-hour week at a job that breaks new ground in the synthesis of ineptitude, sycophancy, and bureaucracy. Work affords you an apartment the size of the monkey cage in a Victorian zoo, and your social life is limited to binge-drinking in chain restaurants with your androidal co-workers. Squeezed to the precipice of the train platform, your gaze glosses from your rain-streaked steel reflection up & over to this...

The coy, conceited grin of that Venusian ideal that most men well never bed and most women will never resemble. "You can never have me," she seems to whisper through those pixel-brushed lips. Then you hear the hiss & groan of the train approaching at full speed...

This seems distinctly unhelpful.
at 10:04 PM No comments:

And a merry, merry (if somewhat late) Christmas to me... 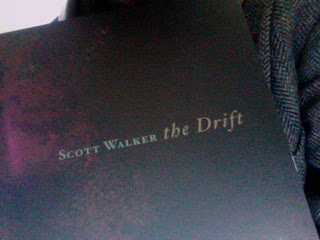