Not All Thoughts Turn To Words 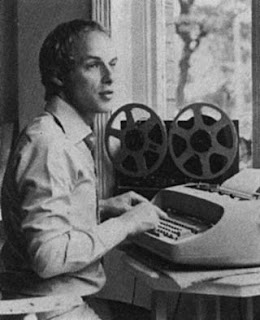 Curious seekers that they are, musicians' creative intentions often bleed into other idioms, and then the trouble starts. Even backed by the full might of the publicity machine, few musicians are admired for their literary prowess, thespian skill, or political acumen. For every Leonard Cohen, Kris Kristofferson, or Peter Garrett, there's a thousand Nikki Sixxes, Mariah Careys, or Bonos. The sense of entitlement that follows massive success in a specific field is the most obvious motivation for these multimedia misadventures, but it's also partially a problem of genre: rock & pop are deliberately simplistic & populist forms that often discourage experimentation or analysis. The purposeful, studious effort required to excel in any art form is likely onerous to anyone who just wants to rock.

Sometimes it works the other way: skills cultivated within a certain musical style translate well into other milieus. It's no surprise that as skilled a lyricist as Jay-Z is a decent author & thoughtful commentator; similarly, since hip-hop is all about embodying a persona, MCs often make far more convincing actors (e.g. Ice Cube, Mos Def) than musicians of other genres (e.g. Jack White, Jon Bon Jovi, Sting, etc) - though I imagine anyone who saw Get Rich Or Die Trying or How High would beg to differ.

It may be expecting too much for successful musicians to be skilled in other artistic forms. It's a reasonable assumption that someone chooses a specific mode of communication because it comes the most naturally to them. As the art most directly related to pure sensation, music is an expression of the inarticulable. Perhaps that's why the majority of musicians flex all the verbal dexterity & rapier wit of Koko the gorilla after chugging a handle of cheap Vodka.

I'd prefer artists were at least as lucid as their audience in discussing their art. Unfortunately, there's little in a musician's quotidian routine that would necessarily encourage aesthetic, philosophical, or political inquiry. The internet is an infinitely resonant echo chamber, packed with pop-cultural detritus, from which any musician can hand-pick a grab-bag of references & aesthetic allusions without having to confront said references' original context. Consequently, Lady Gaga can name-drop Andy Warhol & Nietzsche all she likes, but her "smartest" song is barely equivalent to forebear David Bowie's dumbest.

More importantly, the current means of recording have placed an undue emphasis upon the production - as opposed to the composition - of music. As digital technology has made world-class recording tools accessible to the masses, professional recording studios with veteran engineers have become frivolous luxury. So musicians must now craft their own sound-worlds from scratch, unaided, even if they've never so much as plugged in a microphone before. The fashion in which their music is captured & represented is arguably of greater concern than even songwriting.

This isn't to say that seasoned engineers make excellent musical directors. Gear-heads are notoriously coarse in their appreciation of aesthetics, since they can find something equally praise-worthy in either Pet Sounds (nice doubling of the piano & accordian!) or Linkin Park (excellent gating on the guitars!). But the musician-engineer relationship provided a valuable & effective division of labour: the musicians were left to focus on their artistic vision, unperturbed by technical considerations, and engineers employed their scientific savvy to faithfully capture & frame the musicians' sound-world.

Obviously, much of the best music is a synthesis songwriting and production, but it's almost never the result of vague intuition or ham-fisted fuckin' around. Those leading lights equally famed for their musical and technical prowess - Quincy Jones, Brian Eno, Steve Albini - began as musicians and gradually developed their own production styles by being inquisitive, assimilating experience, and spending a lot of time in studios. It's precisely because of their intellectual curiosity that polymaths not only craft some of the most interesting music, but are more engaging in discussion. Intellectual laziness breeds artistic laziness, which in turn spawns boring albums and bad interviews.
at 10:51 AM 2 comments:

Even if not one single other soul vanishes today from this earth, this proves that the Rapture has indeed come. Give God the ol' figure-4 leg-lock for us, Randy!
at 11:18 AM No comments:

Noam Chomsky on the death of Osama Bin Laden:

We might ask ourselves how we would be reacting if Iraqi commandos landed at George W. Bush’s compound, assassinated him, and dumped his body in the Atlantic. Uncontroversially, his crimes vastly exceed bin Laden’s, and he is not a “suspect” but uncontroversially the “decider” who gave the orders...

And the immortal Bill Hicks, from Rant in E-Minor. 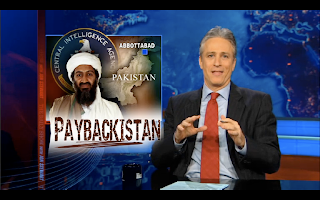 As much as I've tried to mediate my media intake since Monday, the consensual tenor of American liberals has been unmistakable: unity! Now is not the time for partisan bickering, point-scoring, or revisionism. Now is the time for America to reclaim its sense of divine purpose, to see its pride bloom phoenix-like, and to (again) nail shut history's coffin! Everyone wave your copy of Team America: World Police in the air like you just don't care!

It's all, of course, disingenuous as hell: liberals are more than happy to engage in the kind of hawkish dick-swinging and self-aggrandizing revisionism for which they've long maligned the right-wing. So great was Obama's coup sans grâce against Bin Laden that much of the American left is gloating that they've beaten the Neo-Cons at their own game.

But chest-thumping machismo isn't a good look for liberals, nor one they're accustomed to, and so there's been the perfunctory lip-service to civil liberties, common dignity, and the rule of law. This in turn produces an aneurysm-inducing level of cognitive dissonance - hypocrisy & self-serving sanctimony so impenetrable that, for example, a single NYT editorial can proclaim that torture "violate[s] the law and any acceptable moral standard" while simultaneously asserting that "the battered intelligence community should now be basking in the glory of a successful operation."

After a decade of having been defamed as cowards, pinkos, pantywaists, apologists, and traitors, and especially now that their guy is in office, American liberals are desperate to occupy the first-person plural within "We killed Bin Laden!" Are they sure they want to put themselves at the center of the story? There is a way for liberals to indulge their id-inflamed glee while distancing themselves from the decade-long horror show preceding Bin Laden's demise. If instead of "we," they said that "a military-mafioso squad of anonymous assassins, operating outside international law, killed Bin Laden," then they'd be mere apologists (as opposed to patrons) of state-sponsored murder.

But that won't do, will it? Claiming Bin Laden's head as a trophy is an all-or-nothing proposition. If liberals are going to wear the broad-shouldered suit of the authoritarian Alpha, then they've got to own it, and I mean all of it: Guantánamo Bay, "enhanced" interrogation, Maher Arar, Abu Ghraib, the Haditha massacre, the Mahmudiyah killings, $1.2 trillion dollars, and at least 919,967 dead. Whoever claims authorship of the Osama Bin Laden's bullet-riddled dénouement signs their name to the whole, gory narrative.

Hope it was all worth it, you bloodlusty exceptionalists.
at 3:01 AM 6 comments:

Email ThisBlogThis!Share to TwitterShare to FacebookShare to Pinterest
Labels: Death, Hypocrisy, Politics, US VS. Them, War

Meanwhile, to the North...

Goddamn it, Canada. I thought we'd come so far. I thought, after over a century of defining ourselves negatively against our noisy neighbours to the south, we'd crafted a distinct & sovereign sense of national self. After all, our elephantine bedmate has been neither a "friendly and even-tempered" beast nor an honourable example to follow.

But no, evidently Canada wants to mirror its adjacent nation, bisecting into a fiercely polarized country whose vocal majority is composed of pigheaded reactionaries terrified of taxes. As in America, the political timbre is being tuned by retrogressive, provincial rubes. So New Brunswick, southern Ontario, Saskatchewan, and especially my fellow Albertans, I hail you in the resonant words of Mr. BDR: nation of motherfucking crackers.

However, there is a considerably bright silver lining to this otherwise dismal election: the New Democratic Party has vaulted from a modest Parliamentary presence to the official opposition. Instead of the ruling right-wingers being opposed by a bunch of milquetoast militarist corporate apologists (cf. American Democrats), they will face a socially progressive, communally-minded party with dedicated nationwide support. The mind reels pondering what hysterical smears American news organizations will chuck at the NDP, given that the American "left" falls somewhere around the middle of the Canadian political spectrum. I can already imagine fat-assed whoremonger Dick Morris calling Jack Layton a "Trotskyite."

But despite their greatest electoral gain ever, the NDP does not have an easy road ahead. This has been the wildest toss-up in Parliament's composition since 1993, wherein Chrétien swept the country, the separatist Bloc Québécois became the official opposition, and the ruling Progressive Conservatives - who once held the largest majority in Canadian history - were nuked out of existence. Today's electoral shake-up is equally shocking, especially with the NDP wiping out the Bloc. The problem is that, between the Conservative's new majority and the collapse of the Liberal Party, Layton has comparatively less influence in Parliament than during the previous minority government. Not only will he have to fight harder to rebuff the Conservatives' mandate, Layton's hard-won prominence is entirely dependent on the notoriously fickle & self-interested Quebec. If he fails to satisfy "les chialeux qui font rien," the NDP's new gains could be nullified the next time around.

But reelection schemes be damned, all that matters now is oppugning Stephen Harper, that beady-eyed oligarchic android who bleeds oil. I would like to return to Canada someday, and I'd prefer it not to have been transfigured into a snowy, sparsely-populated counterfeit of the United States. I left that country for a goddamned reason.
at 1:23 PM 4 comments:

After a mere decade of costly, murderous effort, the largest imperial military apparatus in history succeeds in killing diabetic cave-dweller!

Wow, I can already vividly feel how the world's changed for the better.

Update: I had no idea that a bloodied corpse getting booted out of a blackhawk helicopter over international waters counts as a burial in accordance with Islamic law. You learn something new every day!
at 1:07 PM 9 comments:

Email ThisBlogThis!Share to TwitterShare to FacebookShare to Pinterest
Labels: Bullshit, US VS. Them, War
Newer Posts Older Posts Home
Subscribe to: Posts (Atom)