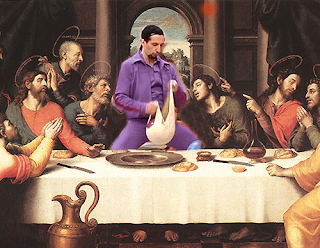 He has risen! Well, it looks like something's a-risin' at any rate...

All the best to ye & y'all's, people of earth. Shalom aleichem & A-Salamu Alaykum as well.
at 6:40 AM No comments:

A Half-Hearted Attempt at Genuine Enjoyment

As the recently-late, formerly great Christopher Hitchens once said, travel - contrary to popular belief - narrows the mind, in that it diminishes difference & spotlights repetition. So it is with the touring musician: the more gigs you play, the more other bands you see, the more other bands you talk about and listen to... the more everything starts to sound the same. This is why so many stalwart musicians are crusty chauvinists guarding the carved-in-stone conventions of their respective genre: they've had to retreat to only the most elemental, primordial iteration of what they love(d) about music to feed whatever flagging enthusiasm they have left for the art form.

The point is that I'm a very tough motherfucker to impress. In the past, this was largely thanks to arrogance (and still is to no small degree), though by now I've logged enough hours as a listener, enough miles as a working musician, and enough hearing damage as an audio engineer that I'm rarely - if ever - surprised. Of course, I still want to be surprised, and seek it like a fiend. On the odd occasion I am surprised, it's not the shock of the new, but the unexpected re-appearance of some estranged sonic friend. No wonder all the contemporary bands that push all my buttons are older dudes who've been stubbornly strumming away since my formative, sponge-brained adolescence in the mid-'90s. Vaz produced one of the gnarliest rock records of the year, Chartreuse Bull, but they're veterans of the hallowed, harrowing Amphetamine Reptile roster. The Psychic Paramount are the most instrumentally enthralling band on the planet, but that is certainly because guitarist Drew St. Ivany and bassist Ben Armstrong have spent almost twenty years in the art-rock trenches. Meanwhile, the inimitable Metatron from Maryland, Daniel Higgs, might as well be one of my parents' old art-school buddies.

The good news, though, is that excellent music continues to be made, and in greater volume that I have time to attend. Some of this year's more experimental releases (e.g. Roly Porter's Aftertime and The Haxan Cloak's gorgeously glacial eponymous debut) were gripping textural explorations that demonstrated an intense, detail-oriented approach to composition - though I still prefer artists whose focus is wide enough to encompass the whole forest, not just the peeling bark of a single birch.

Another Year, Another Holler

Then, of course, there is the record collection. Now that my wife is as avid a crate-digger as I am, we've fast run out of shelf space and now our floor is disappearing almost as quickly. A great many (if not most) of our acquisitions this year have been '60s and '70s Italian soundtracks and funk bibelots, since it's a musical area we enjoy equally. Sure, most of it is breezy & cosmopolitan, much to my wife's pleasure, but there's plenty of strange sound-mass strings & free-jazz bass spazzery to keep an avant-gardiste prick like myself happy. Anyway, here's a few of the tunes that earned the heaviest rotation on our turntable this year...

Well, the second-craziest despot to rule a third-world autocracy has become the newest member in Ozymandias' Infernal Big Band. That is, he's dead. Neither will he be missed, nor will anyone hesitate to celebrate his demotion to mere worm-meal as Jong-Il's death is unencumbered by gruesome criminal circumstance. Good ol' fashioned natural causes as opposed to, say, occupational hazard.

That being said, given that no one has the slightest notion what North Korea's contingency plan was once Dear Leader slipped this mortal coil, I'm suddenly very happy to be exiting the Orient for the next few weeks...
at 12:22 PM 2 comments:

Meanwhile, on the Far-Eastern front of the class war...

A Lamborghini, two Mercedes Benz, and eight Ferraris were involved in a high-speed pile-up on a rural highway in Yamaguchi prefecture, totaling the cars and sending ten people to the hospital.