Given that already five years have passed since he found himself "beguiled" by Coldplay, I'm probably well late in calling this, but let's make it official: JUMPED THE SHARK. 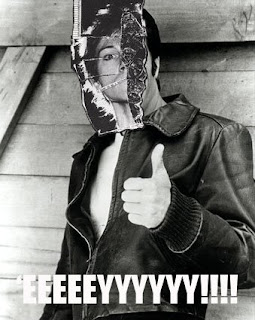 Mark "K-Punk" Fisher is the online polemical analog to Morrissey: an exquisitely-posed dilettante driven by a romanticism so cerebral & idealised that every facet of reality is met with supercilious pessimism, twinned with an arrogance that allows him to argue in favour of his (or his paladins') own failures while glibly dismissing positions or accomplishments that conflict with his imperturbably self-contained weltanshauung. Also, despite incessant use of variants of the word "libido", there's no clear evidence that K-Punk enjoys anything in a sweaty, smelly, unintellectualised, reflexively feral, excretion-of-bodily-fluids way. A Robert Christgau for British Pierrots.

Ooh, is this skirting too close to an ad hominem attack? Here are my terms for detente: instead of ducking your obligation as a critic by weakly reversing my question, Mark, please explain what is so totally uncompelling about Sonic Youth's entire 16-album oeuvre, where is this bridge between the '60s and post-punk SY rebuilt, how they've contributed nothing to the advancement of music as an art. You can lob the "tepid, flannelly, terminally uninvolving college alt-rock" grenade at, say, Washing Machine, but not EVOL. And don't detour into some More Alt. Than Thou game of The Price Is Right by "gesturing to artists more marginal" like DNA or the Dead C.

So that's it. Between the metapolitical miserablism and helping legitimise head-drillingly dull split-hair dance (d/s)ubgenres with moronic names like "wonky", I'm tuning out of K-Punk's frequency. Anyone who can turn an apology for fucking up a live mix first, into an exprobation of the ghetto set-up; second, into a masturbatory epode about a "sound [that] is in no sense normalised; on the contrary, it is volatile and eratic [sic]"... suffice to say he's on very thin ice for lambasting anyone for being "vaguely bohemian/arty middle class urban professionals" who dabble in the "most self-conscious meta-art."

...it's not my hostility towards SY that requires explanation - it's SY's hegemonic support that needs to be accounted for.

thanks for all the SY comments & contributions

"where is this bridge between the '60s and post-punk SY rebuilt"?

Daydream Nation, from the first notes of 'Teen Age Riot' - that's when they perform their rite of irenic intergenerational communion, telling Dinosaur Jr it's OK to like Neil Young in a song that could be written in std tuning... There's plenty of interviews/articles where they specifically talk about how the postpunk anti-60s blinkers were becoming restrictive by '88 - so they chose to embrace that era, hence the Led Zep symbology, the _double_ album format etc. And while people always describe DDN as a celebratory culmination of the underground's upward trajectory, in fact I'd say it's defining mood/mode is the autumnal/elegiac... [That's not to say their tapping of the 60s means they automatically become guilty of being Lenny Kravitz though]

Mark's argument would have worked better if he'd taken that moment rather than BMR...

Just trying to decide how fully to respond to his last blast.

Nice Death to Our friends clip.

Y'know, it'd never even occurred to me that the insistent strum of "Teenage Riot" is basically Crazy Horse at double-speed... but you're absolutely right.

I guess part of the argument stems from a certain taxonomic confusion: post-punk VS post-hardcore. I've always considered Sonic Youth (at least everything past the first EP & Confusion Is Sex) to be the latter. "Post-punk" calls to mind either the caffeinated, angular jitter of dancey Brit genre-splicing, or the fractured squall of CBGB's second generation. Sonic Youth were much more a part of the American scene enamored with hardcore's blitzkrieg energy & aggression, but tempered by (a) greater musical proficiency, (b) a high-minded, art-school perspective, or (c) both. Not only would Mark's argument have been better if he'd pushed his tipping point later than BMR, he did himself a disservice by comparing SY to the likes of The Pop Group instead of, say, The Butthole Surfers.

Because fundamentally, talking about "post-punk" generally & Sonic Youth specifically from a British, early-Tatcher-era perspective is a bit like trying to compare Man U and the Dallas Cowboys on the basis that they're both "football teams".