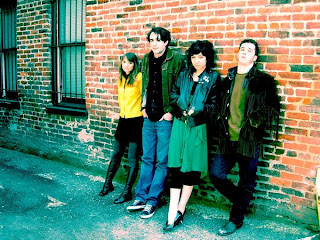 Friends, nomads, no-country-for-old-men... do you suffer from ragged nerves? Sleepless nights? A gaseous suspicion of & contempt for your fellow man? In need of a psychic balm that just burns away the tattered fringes of your damaged psyche? Then may I present to you... The Vandelles.

Yeah, so they rock the same black rebel motorcycle schtick that was already second-hand by the time the Reid Bros. got ahold of it. But hey, it's an act we all enjoy and who these days couldn't use a little high-volume, tweeter-shredding treble to wipe their mental slate clean? As an unlikely bonus, the Vandelles actually have good tunes to back up their black-leather-'n'-Fenders mean-mugging. Double bonus: no stupid goddamn haircuts!

Hang on a minute: since when do I, Monsieur Nouveau Modernisme Deluxe, get off plugging retro rock 'n' roll acts? Since today's release of the Vandelles eponymous EP makes them my labelmates on SVC Records, and the more of you that buy the EP, the more SVC can lay out on my own upcoming LP. Ha! Seriously, though, anyone with the internet access to visit the SVC online store can absolutely afford the couple o' quid that the EP costs. If you just can't be bothered to support the dreams of creative twentysomethings, then for god's sake don't blow the cash on another pack of smokes or beer: send it to the Red Cross, you selfish bastards.

So whaddaya think? Did I miss my calling as an ad man? Could I sell sand to a camel or London Bridge to a Yank? Hell no. The fact is my job as a "commercial music composer" is the only one from which I been fired, and I slunk out of the (ahem) formal music press when I suspected I was just a poorly paid hack boosting redundant tripe. Which makes it all the more bemusing that I've started getting review requests from PR people pushing lo-fi folk Johnny-Come-Latelys or whatever. It's at least encouraging insofar that this means someone out there actually reads this damned blog and feels my voice is worth including in the conversation. But still, wow - I have a readership? Flabbergasting!

Similarly, I received an e-mail the other day that not only declared that the writer was a "big fan" (!) but I'd "inspired" him to start his own cult-crit blog, Spots Before the Eyes. Apparently, my quasi-qualified rants have helped his thinking regarding some of the perennial quandaries facing the post-millenial music fan, including (these are quoted directly from the e-mail):

This query raises questions of its own: has the web's leading music journal crafted so well-sculpted a niche for itself that "Pitchfork music" is now a recognizable genre? Not quite. I can't think of a single band that encompasses everything the Forkers throw their critical heft behind. To its credit, Pitchfork still casts a reasonably wide stylistic net; on Friday, its reviews covered alt-country, orchestral pop, and black metal acts. That being said, there's a handful of aesthetic & performative tricks that Pitchfork falls for every time, recognizable enough that you could bet money on what rating an artist will receive and walk away with a heavier wallet. Was anyone surprised that the new Vampire Weekend album - a year after the backlash and boasting a newly-earned confidence - received an 8.6 and the "Best New Music" imprimatur? Or that Animal Collective shat out another hippy-dippy bleepfest and garnered a perfect 10? On the other hand, if Mike Patton's next project earns above a 6, or if the Dum Dum Girls' debut full-length earns anything below a 7.8, I'll eat my shoe.

Why aren't I familiar with any of the songs performed on American Idol?

The easy answer, of course, is that they're not worth knowing! But this touches on the diasporic effect digital culture has had. Christopher Weingarten hit the nail on the head, speaking at a Twitter conference last year:

If you read Spin or Rolling Stone in '96, you'd get an article on Nine Inch Nails, an article on the Chemical Brothers, an article on Snoop Dogg, and the internet doesn't work that way. ...It's harder to get exposed to things that aren't in your comfort zone. I have friends that are so deep into indie-rock they don't know what the fuck Katy Perry is, or Lady Gaga. ...I can always learn about stuff that's important to me, that's easy. I wanna learn about stuff that isn't important to me.

Because the internet allows users to custom-tailor the information they receive, it's frighteningly easy to block out anything that isn't a known & comfortable fit - and this goes for political opinions and even facts, not just music. So unless you actively enjoy & ingest the kind of formulaic power-ballads that appeal to foghorn-throated starlets, there's no good reason for you to have idly heard the shit on American Idol.

Why is so much music criticism so shitty?

Well, whenever you deal with a form that encourages the belligerent expression of personal taste as though it were divine writ, you're going read an ungodly amount of self-indulgent pap. The job pulls more than its fair share of unqualified punters attracted by the glamour & apparent ease of the work. ("I just talk shit about a band and get paid for it, plus backstage passes? All right!") It's an occupational hazard, really.

But the internet has only aggravated the issue. With neither copy editors or column space to rein in the writing, music bloggers & online scribes can ramble for thousands of useless, swampy words. At the other end of the spectrum, that people think a 140-character monologue could possibly count as meaningful journalism is surely the death knell of the form.

But let's not forget that music is overwhelmingly a young person's game, by & for teenagers and twentysomethings. Most music journalists simply haven't had the time to mature as writers. A friend who's been devouring the 33 1/3 book series said that the best-written volume by a nautical mile was the one about Hendrix' Electric Lady Land, by a man old enough to have actually seen Hendrix in concert. This means he has literally a lifetime's more writing experience than your average NME hack. Lord knows the reviews I wrote for the Baltimore City Paper were rather shit - because I was some fatheaded 20-year-old in love with his own wordsmith wankery. Give me another ten years and perhaps I'll have something worth saying.

Whether anyone will be listening, of course, is another question altogether.
at 11:07 AM

Wow, thanks for the plug or whatever that was. I probably should have given you warning that I haven't posted much good or even very interesting on my blog. Anyway, I really do like your blog. When I was avoiding writing up research after the last academic year, I spent a couple of days googling to find people discussing the likes of Deerhunter or Grizzly Bear. I find these bands kind of boring, and whatever musical needs they could fulfill are already met by other acts. Moreover, their "experimental" nature is more irritating than anything else, and if I'm in an experimental mood, I'd rather listen to Swans, EN, or DNA, or whatever act drives the students from my office hours (I had some great mixes for that!). Anyway, your blog was practically the only one that put into words some of the thoughts I was having.

So your blog and the utterly shitty review of the new Lady Gaga in pitchfork were my main inspirations.

And my questions are kind of silly and obvious, but I think there's some interesting cultural phenomena behind them. What is the commonality of the music that pitchfork fawns over? And seriously, it was shocking how little of the American Idol canon that I knew. Sure, a lot of it is overwrought garbage, but it's overwrought garbage in specific ways. And the naive ultra-earnest tone of the blog is an attempt to find my own approach to criticism. I could probably snark or talk about how exactly I was feeling when I heard a song for the first time, but that's been done.

BTW, I like the Vandelles. But I can't go along with your endorsement wholeheartedly since I'm friendly with a member of Ringo Deathstarr who are probably their main competition but who are also your labelmates.

Obvious questions are often the hardest to answer, so you needn't apologise at all for the semi-naive tone of them. Certainly, what I tapped out above barely begins to answer them. (In fact, my answer to the "Pitchfork music" question elided any subjectively qualitative judgment altogether. Whoops.) Besides, lord knows there's already enough snark in the world of online cultural commentary. The last fuckin' thing we need is another Hipster Runoff; being embarrassingly earnest may actually cut quicker to the heart of things.

And I'm right there with you about what passes for "experimental" in pop music these days. Throw in some production gags, an unconventional instrument, or record it lo-fi but without actually challenging the genre forms or even diatonic tonality, and somehow everyone oohs & aahs over the "boldness" of it. Bloody disappointing.

Oh, and as for the Vandelles VS Ringo Deathstarr... as far as I'm concerned (as I think they are), it's birds of a feather, not Leno VS Conan. Ain't no non-compete clauses over at SVC, so no guilt need be incurred by enjoying both!